Thin layer chromatography (TLC) is a tried and true method for the separation of components in a mixture based on the polarity of the individual components. When a standard is included, this method can also be used for the identification of each component of the mixture.

The TLC technique requires 2 phases: a stationary phase, which involves some sort of matrix, and a mobile phase, which is a mixture of solvents. The type of mixture you are interested in separating dictates the precise materials used for the 2 phases.

The stationary phase for TLC consists of a plate, usually a sheet of plastic or glass, that is coated with an absorbent material (i.e. silica). The extracted sample mixture (such as a lipid extract from cells) is applied at the bottom of the plate, allowing the solid phase to capture the mixture. The plated sample is then “developed” by placing the TLC plate into a sealed chamber containing the mobile phase solvent system. The solvent system is selected based on its ability to dissolve the desired components to be separated. This chamber also contains a Whatman Paper “wick,” which is a sheet of filter paper that helps to ensure that the chamber is evenly saturated with solvent vapors.

For the purposes of lipid separation, particularly for neutral lipids such as triglycerides, we will be using a silica coated plastic plate (stationary phase) and an organic, largely nonpolar solvent mobile phase consisting of petroleum ether: diethyl ether: acetic acid at a ratio of 84:15:1. The lipids are then visualized using resublimed iodine, which will bind to double bonds found in lipid hydrocarbon chains and aromatic compounds.

As summarized in the table below, this solvent mixture is intended to capture both nonpolar and polar species in the lipid extract. The polarity index for petroleum ether (0.1) positions this solvent component as extremely nonpolar, and will allow the most nonpolar lipid in the mixture to be “dissolved.” Whereas acetic acid, which has a high polarity index (6.2), is much more polar since it has the capacity to ionize, and serves as a solvent for the more polar species in this mixure. However, do note that the components in this solvent are not provided in equal quantities; it is both the polarity index as well as the relative amount of each solvent component that dictates how it will carry specific lipid species up the TLC plate. 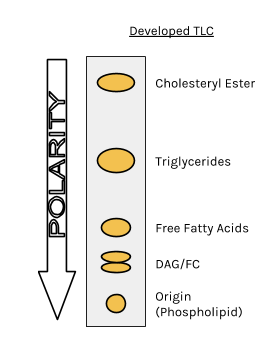 The less polar a component in a mixture is, the further it will move up on the TLC plate.

Review and learn more about lipid 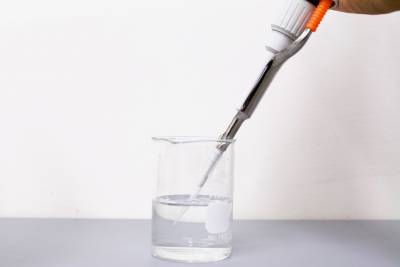 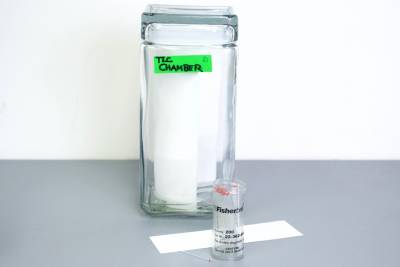 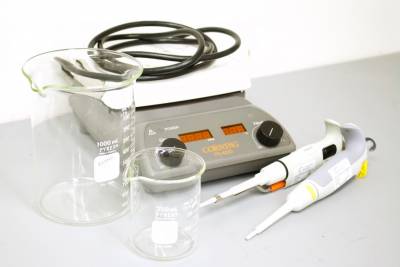 *Note: Indicated items should be used in a fume hood, and must be handled with the appropriate personal protective equipment, including gloves and safety goggles.

What conclusions can you draw about the polarity of the substances?

Discuss one purpose of this technique in research or industry.

Check out some steps in the process 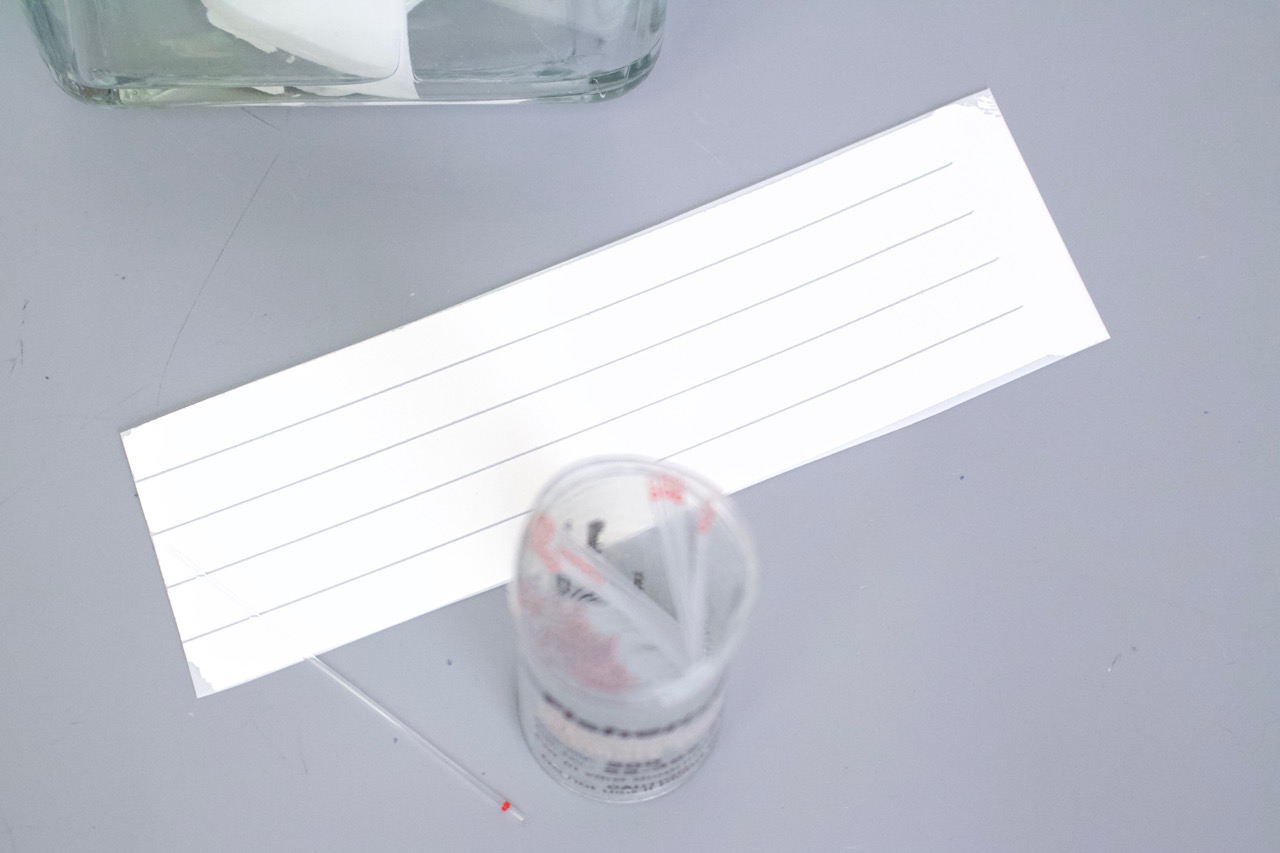 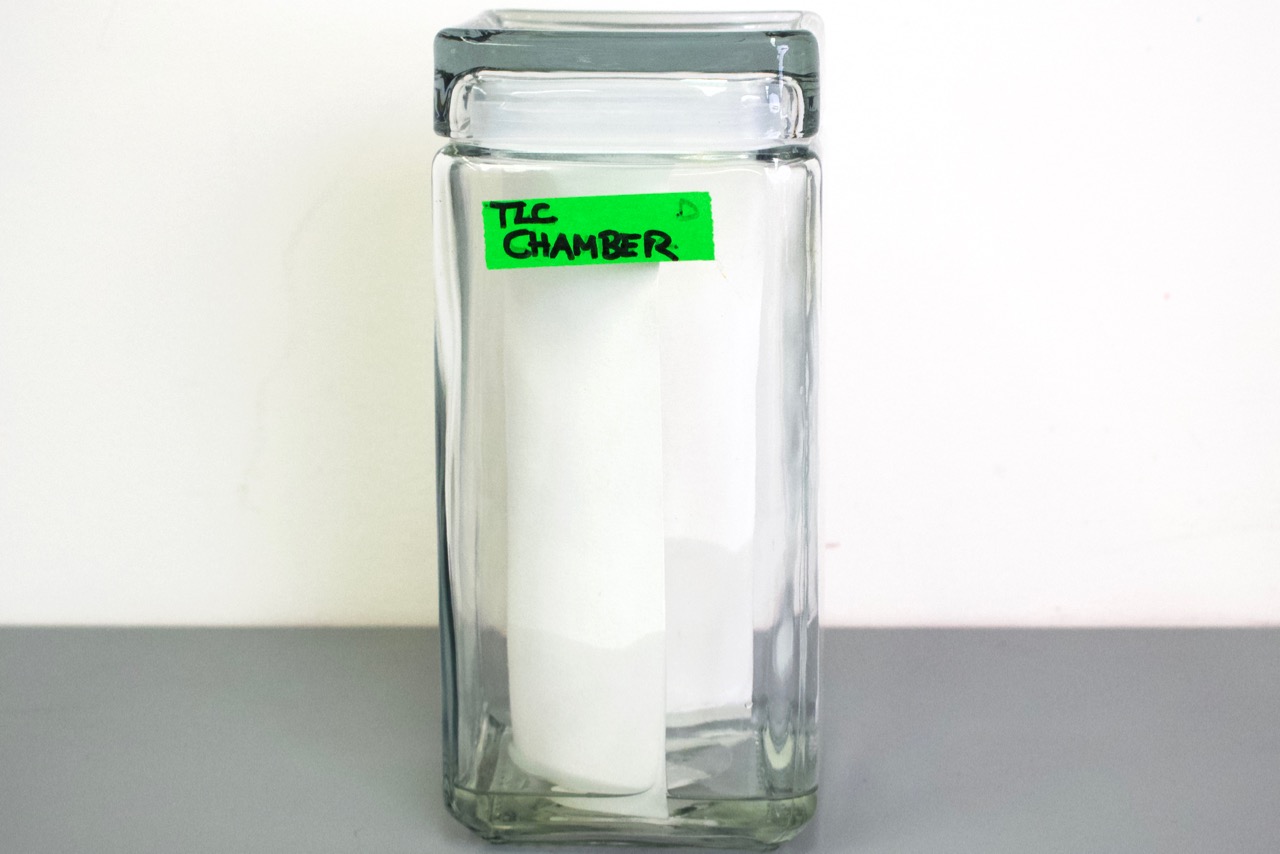