Let’s go back to making a vinaigrette. We might shake vigorously to mix oil and water together, but for the reasons mentioned above, the mixture will quickly separate into two distinct phases.

However, there are many contexts that require the stabilization of oil and water mixtures. How can we lower the energy barrier to prevent separation? The answer lies in the addition of emulsifying agents, also known as surfactants.

Surfactants are molecules or molecular compounds that lower the surface tension at an interface (interfacial tension). In the case of water-oil interface, adding a surfactant will lower the energy barrier for breaking hydrogen bonds among water molecules, and allow more freedom for water molecules to interact with other types of molecules in a given system. Additionally, surfactants have the ability to form micelles, 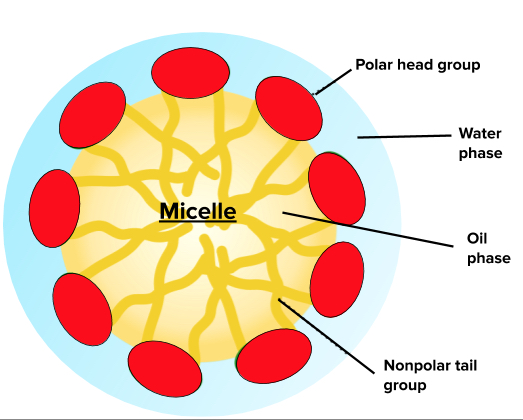 which are a type of molecular “cage” that forms around solute molecules that are normally immiscible in a particular solvent (ie nonpolar molecules can be protected inside a micelle when immersed in a polar solvent).

From a chemical perspective, surfactants solve the incompatibility between water and oil because they contain both polar and nonpolar properties, serving as a bridge between polar/aqueous and nonpolar/organic substances. A common surfactant is a phospholipid, 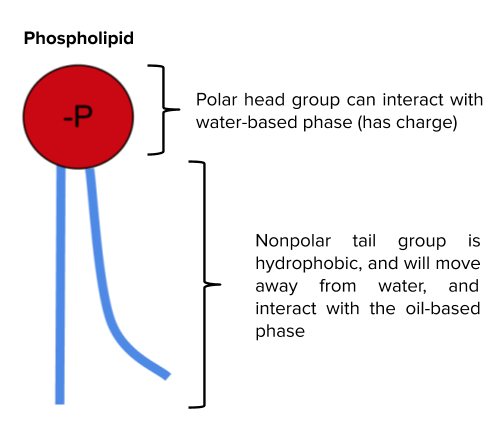 such as lecithin, which contains a polar headgroup that interacts with water, and a nonpolar tail that interacts with oils. In an emulsion, a phospholipid would surround the dispersed droplets, creating a micelle, forming a barrier between the water and oil.

This presence of a phospholipid stabilizes the emulsion, preventing the oil and water components from separating. This is incredibly useful in industry, or even in your kitchen!

Visit RockEDU Programs at the Rockefeller University
Download
Files of Emulsifiers and Surfactants
Save to Google Drive
Files of Emulsifiers and Surfactants
Your download is opening in a new tab. Please allow a few moments for large files to process.
Download is incompleted.
Please Try Again.
Save is completed.
Saving is incompleted.
Please Try Again.