Symbioses are the ultimate examples of success through collaboration and the powerful benefits of intimate relationships. — David Relman

In biology, there is a tendency to walk a reductionist path, breaking every system down to individual components in order to understand how a biological system works. This strategy has certainly shed light on many fundamental principles pertaining to life on earth, leading to immeasurably impactful discoveries. However, as new technologies emerge and perspectives widen, we are able to take a more holistic viewpoint in our quest to understand the underlying complexities of life.

This is particularly true in the context of evolution. The study of evolution has historically centered on how competition at the individual level — i.e. “survival of the fittest” — ultimately impacts the phenotypic frequencies in a population. This notion of natural selection, which was independently developed by both Charles Darwin and Alfred Wallace (jointly published in 1858), established the idea of speciation from a common ancestor. Around the same time, Gregor Mendel, a monk from the Austrian Empire (now Czech Republic), developed the underpinnings of modern genetics through pea plant hybridization experiments.

When the significance of both principles were realized throughout the scientific community, the tenets of natural selection were fused with Mendelian frameworks. Inherent to both frameworks is/was the assumption that a single organism with a distinct genome represents a unit of life. Due to the increasing accessibility of Next Generation Sequencing technology (1), which has revolutionized our ability to learn about the microbial world, this notion is being blown wide open. As we divorce ourselves from the germ theory of disease, which exclusively frames microbes as agents of illness, and reposition our viewpoints to include the impact of microbiology on evolutionary processes, we can start painting a more comprehensive picture of how life evolves.

Multicellular life forms — such as plants and animals — have existed in symbiotic relationships with microbes throughout the course of evolution (2). This means that a “unit of life” can be considered more than a single organism containing a single nuclear genome. Lynn Margulis, an American evolutionary theorist and biologist, coined the term holobiont to represent the life-long symbiotic relationship between a multicellular host and a vast diversity of microbial counterparts (3). The complete genetic content of the holobiont, which includes the genome of the host organism, as well as the genomes found inside organelles (like mitochondria) and symbiotic microbes, is referred to as the hologenome. The idea of a hologenome was first introduced by Richard Jefferson in 1994, and has since been a topic of study and discussion among scientists (4). 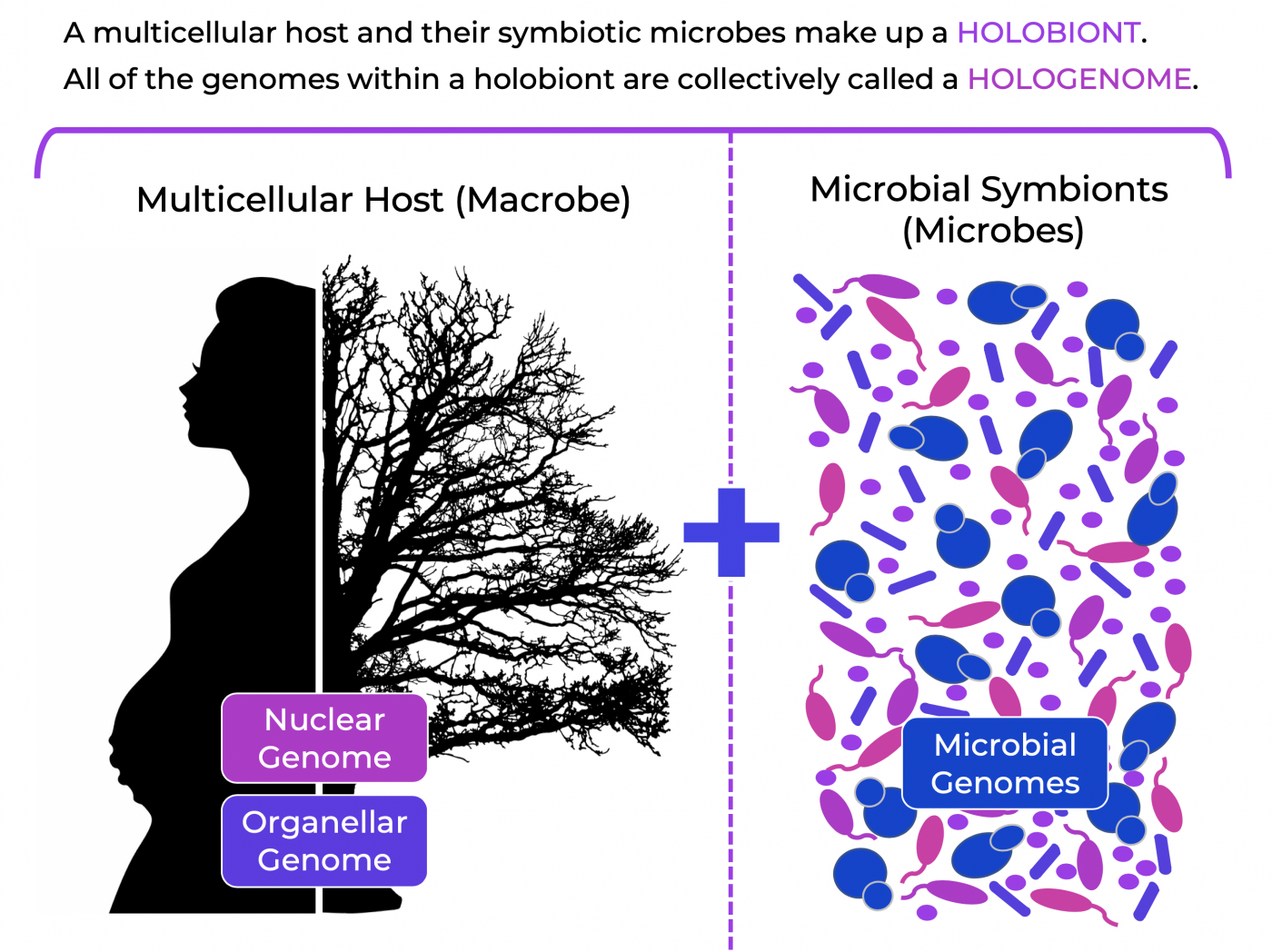 If “units of life” consist of a group of organisms living in a symbiotic relationship (holobiont), and that within this exists a network of genomes (hologenome), then it is important to consider whether this represents a unit of selection during evolution (i.e. do microbial symbionts play a role in the evolution of higher organisms?). Expanding on our current knowledge of evolution, the Hologenome Theory of Evolution posits that microbial symbionts significantly influence how a host organism responds to evolutionary pressures (5). Given this expanded view, natural selection might actually be a function of genetic variation among hologenomes, which allow the holobiont to adapt to environmental changes.

Symbiosis and Natural Selection of the Hologenome

Symbiosis, or, in biological terms, the relationship between two or more organisms, can be classified in several ways:

Microbial parasitism has been a huge focus throughout modern scientific history, namely due to the importance of understanding human infectious disease (i.e. germ theory), the impact that pathogens have on the agricultural industry, or other factors of economic importance. But “infection” is not always a bad thing, and studies on all types of symbiotic relationships are shedding light on the ecosystems within a holobiont. Using human hosts as an example, we know that different regions of the body serve as distinct ecological niches that house a defined set of microbes (i.e. your belly button is a different ecological niche compared to your eye lids or colon). In general, symbiosis between host and microbe can vary in the following ways (6):

All of these factors can create sources of variation within the hologenome, which can be acted upon by natural selection, leading to the “survival of the fittest” holobionts. This ultimately impacts the hologenomic frequencies in a population. However, in the absence of selective pressure, variation at the holobiont-species level can also arise due to functional redundancy. This explains why some hosts of the same species have a core set of microbiota at higher taxonomic levels (i.e. order or phylum), but not at the microbe-species level. For example, there are many different species of bacteria that produce lactic acid as a fermentation product, but that does not change how lactic acid functions — this means that lactic acid bacteria are taxonomically diverse at the species level, but when considered at the functional level, they are all very similar.

While we are just beginning to uncover the incredible complexity of host-microbe symbiosis and coevolution in the holobiont, we do know that the host genome (GH) interacts with the genome of microbial symbionts (GM), and each genome within the hologenome interacts with the environment (E).

Taken together, evolution can be viewed in terms of the holobiont: GH x GM x E

Limitations of the Hologenome Theory of Evolution

The hologenome theory of evolution, which expands on the current Darwinian model, is not without limitations and refutations. For instance, arguments are being made that a holobiont is a community as opposed to an individual evolutionary unit, and therefore cannot be acted upon by natural selection (9). But say that holobionts are indeed individual units that are selected upon, are all genomes within a hologenome inherited to the same degree, and if so, are they subject to equivalent evolutionary pressure? We already touched on the idea that the microbiome can be acquired through vertical as well as horizontal transmission. But evidence is showing that a horizontally-acquired microbiome in a host can in fact be passed down to the progeny of said host, echoing traces of Lamarckian evolutionary theory on the “inheritance of acquired characteristics” (4).

Although Jean-Baptiste Lamarck, a 19th century French naturalist, did not consider the microbial world when crafting his evolutionary theory, it is interesting how his principles apply to the evolution of the holobiont. However, until we can determine the degree to which horizontally-transmitted microbiomes are maintained in populations, much will remain unanswered.

Fundamentally speaking, the evolution is characterized by changes in genetic frequency in a population over successive generations. Whether this applies to individual genomes or a hologenome remains to be answered. We are just beginning to build knowledge around the hologenome concept, and as research advances, we will start filling in the gaps in our current understanding.

Holobionts: Beyond Humans as Hosts

The human microbiome is a hot topic, both in science research and in popular media. More and more, we are learning about the impact of the microbiome on human health and well-being. But, these studies represent a very anthropocentric understanding of symbiosis between a host and it’s microbial symbionts. While it is valuable for us to know and understand such teachings, we must acknowledge that the evolution of nearly every eukaryotic organism on this planet has occurred in the context of microbial symbiosis.

Another extraordinary evolutionary milestone resulting from symbiosis occurred approximately 460 – 700 million years ago, when the first “plants” colonized land. More specifically, scientists believe that an ancient species of fungus, which had the ability to grow root-like filamentous structures, or mycorrhizae, assisted a phototrophic algae as it transitioned from water to land (11, 12). The evolutionary predecessors of this ancient fungus, which belong to the glomeromycota division of the fungal kingdom, live almost exclusively as symbionts with current land plants.

Symbiotic relationships may not always represent a favorable situation for a host cell. Indeed, infection with a parasitic symbiont could have a deleterious impact on a species. However, parasitic symbionts also push their hosts to resist their own demise, and put up a cellular defense. As any living cell can be considered a host, it is important to recognize that both prokaryotes and eukaryotes have developed some type of immune system, the evolution of which was influenced, at least in part, by parasitic symbionts (13). One of the most valuable discoveries in biology today — the CRISPR/Cas9 genome editing system (14) — harnesses the technology of the prokaryotic immune system, and will undoubtedly revolutionize the face of what is possible in biology.

Humans have been working to understand the mechanisms underlying evolution for less than 200 years. As the scientific toolkit grows in its sophistication, so does our understanding of biological processes. However, new insights also provide clues into how much there is yet to discover. With next generation sequencing technology, we are able to take a more comprehensive view on the nature of symbiosis, and begin to shift the evolutionary paradigm to include the incredible role of the microbial world.