Each time I’m asked how my summer went, I flaunt my “nerdy” nature and start describing the research project I assisted with in the Jarvis Lab. My mentor was working on a new method to examine gene expression. He hoped to use this knowledge to better understand the genes in the song system of zebra finches.

Looking back, I could have never anticipated working on research that could actually change how functions of genes are studied! 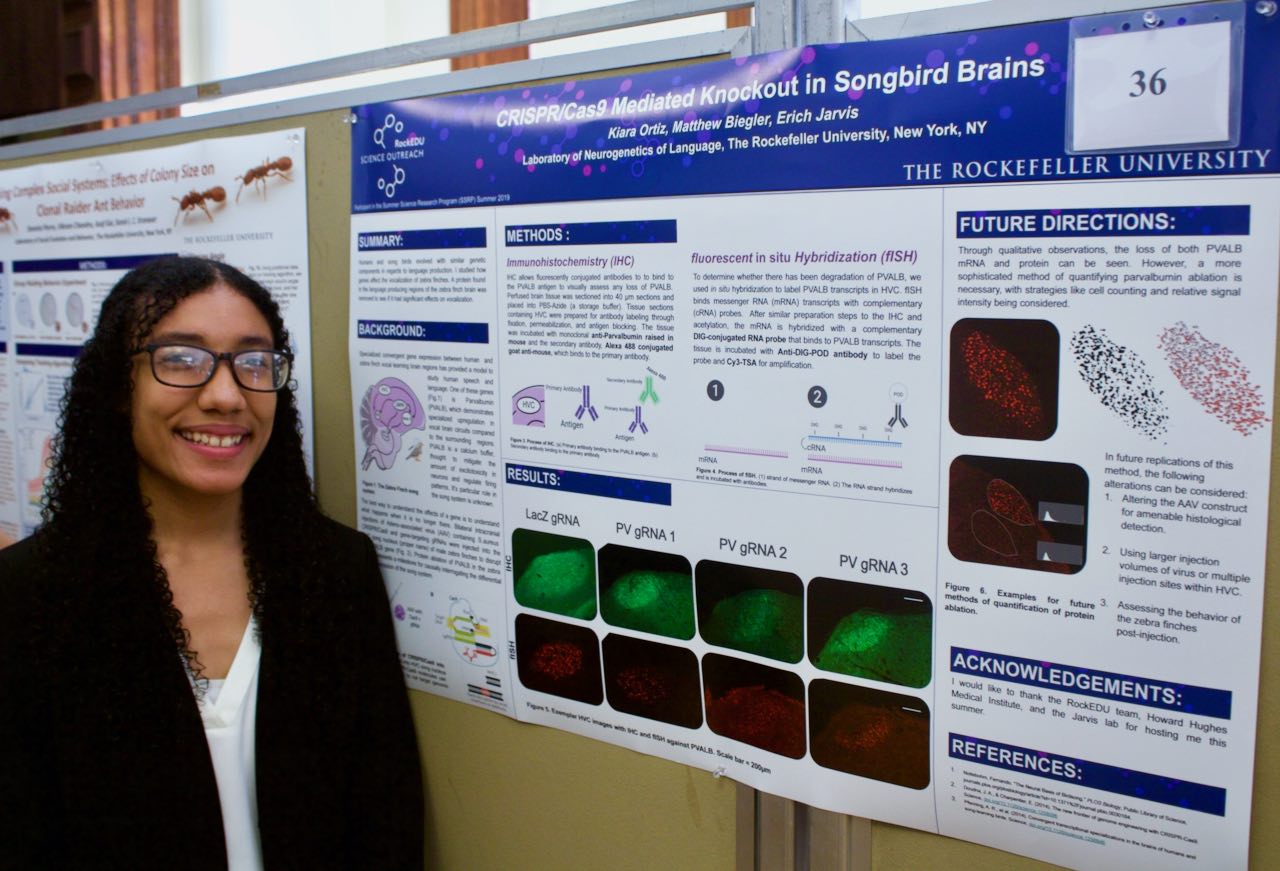 When explaining my summer, I always start with the beauty of zebra finches and their songs. Shortly after, I segue into the convergent gene expression between songbirds and humans. But, before I recount my individual project – which was confirming whether the virus effectively “removed” the gene – I’m usually stopped. After I mention the word CRISPR or even mention gene editing, I am asked about ethical implications.

“Do you support designer babies?!”

Introduced in 2012, CRISPR has the ability to “remove” a targeted gene and inhibit its expression. Simply put, CRISPR is used because the best way to see how a gene works is to see what happens when it is no longer there.

However, especially with headlines in today’s media, gene editing doesn’t always have the best “rap”. In my small high school, gene-editing tends to have a negative connotation. It translates as . . .“Power-hungry humans trying to tamper with the laws of nature”. Though dramatic, it’s a common misconception. This is because people are more aware of human cloning scandals rather than how CRISPR is used on a daily basis in labs for (various scientific inquires) on a daily basis!

With the development of CRISPR, genes are now able to better understood in just a matter of weeks! Genes that are associated with diseases ranging from Hemophilia to Huntington’s disease are able to be studied in greater depth and ultimately assist in improving treatment plans for patients. Scientists are working on Malaria-resistant mosquitoes or limitless supply of transport organs.

Yet, as these gene-editing projects mostly occur unnoticed, the media prioritizes human gene editing “scandals,” particularly the research conducted by He Jiankui. He claimed to be the first scientist to genetically edit human embryos, a practice that is illegal in the United States and many countries around the world. Although not illegal in China, His researched was not authorized by medical ethicist or lawmakers. With the advancement of CRISPR technologies, scientists, policymakers, and ethicists soon need to decide the appropriate use for it.

Though immensely beneficial, the ethical implications of CRISPR will remain under great scrutiny for years to come. Under what circumstances can CRISPR be used? Although CRISPR is deemed as precise, what are the health risks? Will the advancement of CRISPR technologies require global consensus? As a student entering scientific field, I jump at every opportunity to discuss one of the greatest debates of the decade, knowing that it will greatly affect research in the future.

If your K-8 kid is interested in science, microscopes, or ants, consider registering them for Science Saturday @RockefellerUniv on May 8. @rockedu_ presents microscopes at 11am EST and ants at 1pm with yours truly.

Interested in learning about equity in mentorship and what it means to be a good mentor? Check out thus event that we’re co-sponsoring with @rockedu_ BIOME! It’s at 1pm on April 28, hope to see you there! https://t.co/BFVjVG2wcB

Our mentorship edu community, BIOME, is hosting its first co-sponsored event w/ the Rockefeller inclusive Science Initiative @ru_risi. Open to all members of the
@RockefellerUniv community. Learn about equity in mentorship & opportunities to get involved! https://t.co/ag7dkmr8rW

The Laboratory of Social Evolution & Behavior @RockefellerUniv in Manhattan is looking for a long-term, full-time Laboratory Technician for ant maintenance. Please RT, and apply if you would enjoy taking care of ant colonies in a research environment: https://t.co/lba1hjsVJh

@ASBMB Hey! I’m Odaelys - scientist/educator at @rockedu_ in NYC 🏙. I’m a member of @ASBMB science outreach and comms committee. Also a microbiologist/immunologists by training who is actively involved with other science outreach initiatives in my spare time. #ASBMBSciOut