Did we ever decide who won that battle? Or, have we always been satisfied leaving the two at a stand-off? Science and art are often thought of as leading a charge from either of these two sides. Scientists stand on the left, armed with their data, prepared to draw any plot line necessary to show their validity. Artists face off on the right with their pens and notebooks postured, ready to push the data back and away in the name of subjective analysis. Who would win? Thankfully enough, scientists and artists have been able to live in a truce for millennia. A secret that is rarely discussed outside of these two fields is the number of double agents that pervade our society. 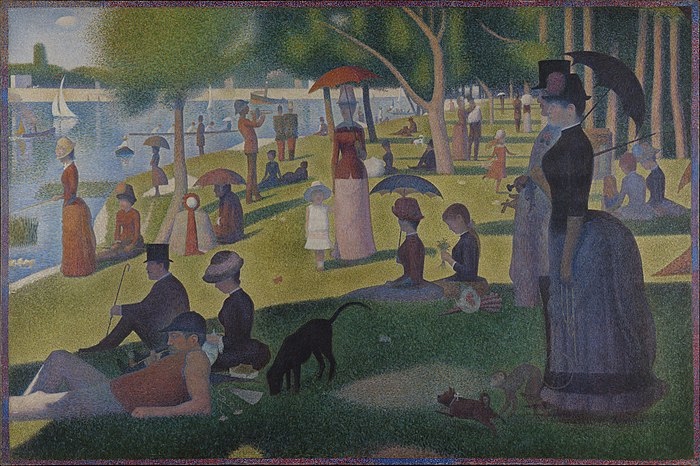 Pictured above is a photograph of a Georges Seurat painting.

As it turns out, many of the best scientists find themselves moonlighting in the arts. For example, I grew up playing the cello, with a few years spent trying to play the guitar and piano. Here at Rockefeller, my PhD advisor is a dancer. Many other members of my lab also play instruments, or dance, or perform in acapella groups. Conversely, many artists incorporate a rigorous and critical construction in their art. Georges Seurat, famous for his pointillism technique, began this when he learned that eyes perceive vision as particles (photons) rather than a pure, uninterrupted image. With equipment being costly, and resources difficult to access it is more difficult to hobby in science with the same ease as the arts, but there’s no reason the mentalities cannot be similar. What binds these two professions together is a mode of thought. Creativity in construction with a deliberation and skill in execution. This seems intuitive in art, but what about in science?

As scientists, we are trying to uncover the unknown. If we applied the same rote techniques to every problem, most science wouldn’t progress very far. Discovery requires ingenuity. And, ingenuity is borne of creativity. When faced with an unanswered question, we are required to come up with new approaches and applications. Not to mention that humans are stubborn animals. If we are determined to discover something, we’ll do whatever we can to discover! 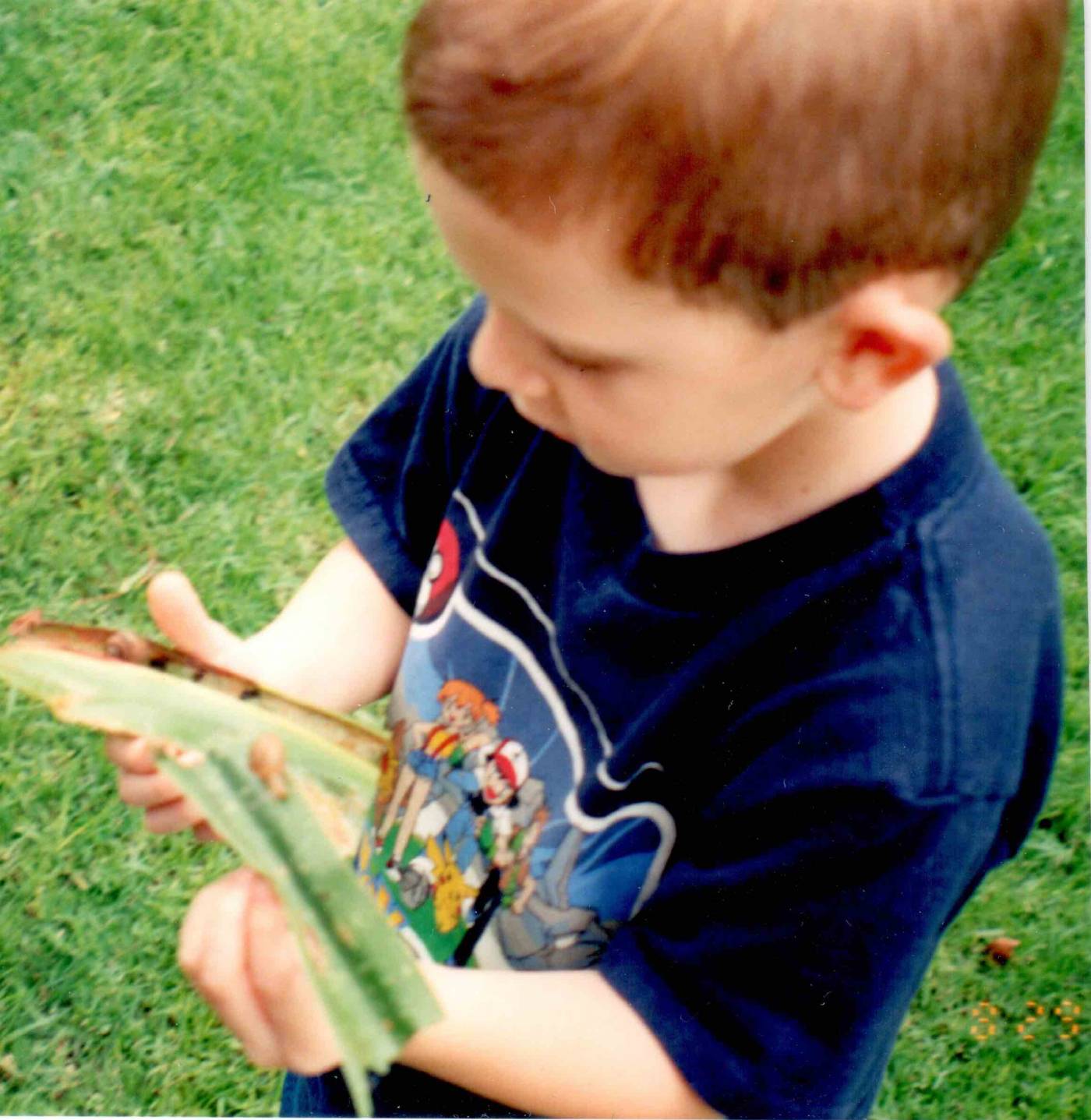 Pictured above is a childhood photograph of César playing with snails!

Many of us in science, or STEM more broadly, remember our earliest passions in science. Mine were dinosaurs and (extant) animals. Anyone who knows me could probably testify to this fact. To this day I can’t get enough of being around animals. As I child, I kept a menagerie of pets—including aquariums, a gecko, chameleon, dog, and even a ferret, to name a few. I grew up watching the incomparable Steve Irwin’s Crocodile Hunter and Jurassic Park. This interest grew as I insatiably read books and watched more shows on animals. I couldn’t get enough. When I wasn’t reading books or watching shows about animals, my friends and I were collecting lizards and bugs from our yards and pretending we were hosts of our own TV programs. At the end of a collecting session, I would proudly display the bugs I caught in various plastic bottles and then rush my parents over to see my “zoo.” Later in childhood, my passion for animals began to merge with what I’d later understand as my first neuroscientific question.

As a kid I was lucky enough to do gymnastics. After spending a few years in the gym learning different skills and combining them into routines, I became awed by something that comes very naturally to most people:

When we want to move, how do our bodies know that we want to move? And if we only imagine movements, our brain somehow stops our body from actually moving!

I would gaze at my hand, opening and closing my fist just thinking about how incredible it is that we can just want to close our hands and it happens!

Even more puzzling to me is that thinking harder doesn’t necessarily mean moving more vigorously. Simply wanting to move my hand faster made it do so. Anyone who has done sport can likely relate to this increased exertion right when it’s needed or wanted (and also how it sometimes fails when our muscles have been overworked…).

The idea that our movements are entirely controlled by our decision to move began to occupy my mind. On a few occasions I’d peer through my chameleon’s terrarium watching her stalk crickets she’d have for dinner; each eye moved independently to lock onto a target, putting its next meal in its crosshairs, and ultimately choose to launch its tongue and collect dinner or hold off for another moment that was more guaranteed. I could almost see her thinking. Considering. Calculating. Surely these movements were not random or programmed. I began to wonder if the chameleon was controlling her movements in the same way that I controlled mine in gymnastics. Each action, a complicated synergy between the brain and the muscles. I loved watching the chameleon make these hunting decisions, and I began to wonder how brains control the behavior of other animals. But, wondering doesn’t really get us very far in science. It’s a start—and probably a fairly good one. Science truly takes shape when we transform our wondering into process; developing a process then leads to the discovery that feeds and fuels more wonder. Yet, there’s a duality to discovery that we face. One side is successful and leaves us happy about learning what we sought to ask. The other side opens a vast gulf of questions. This means we are never done, never satisfied, and we always look for new ways to resolve the new questions we begin to ask. 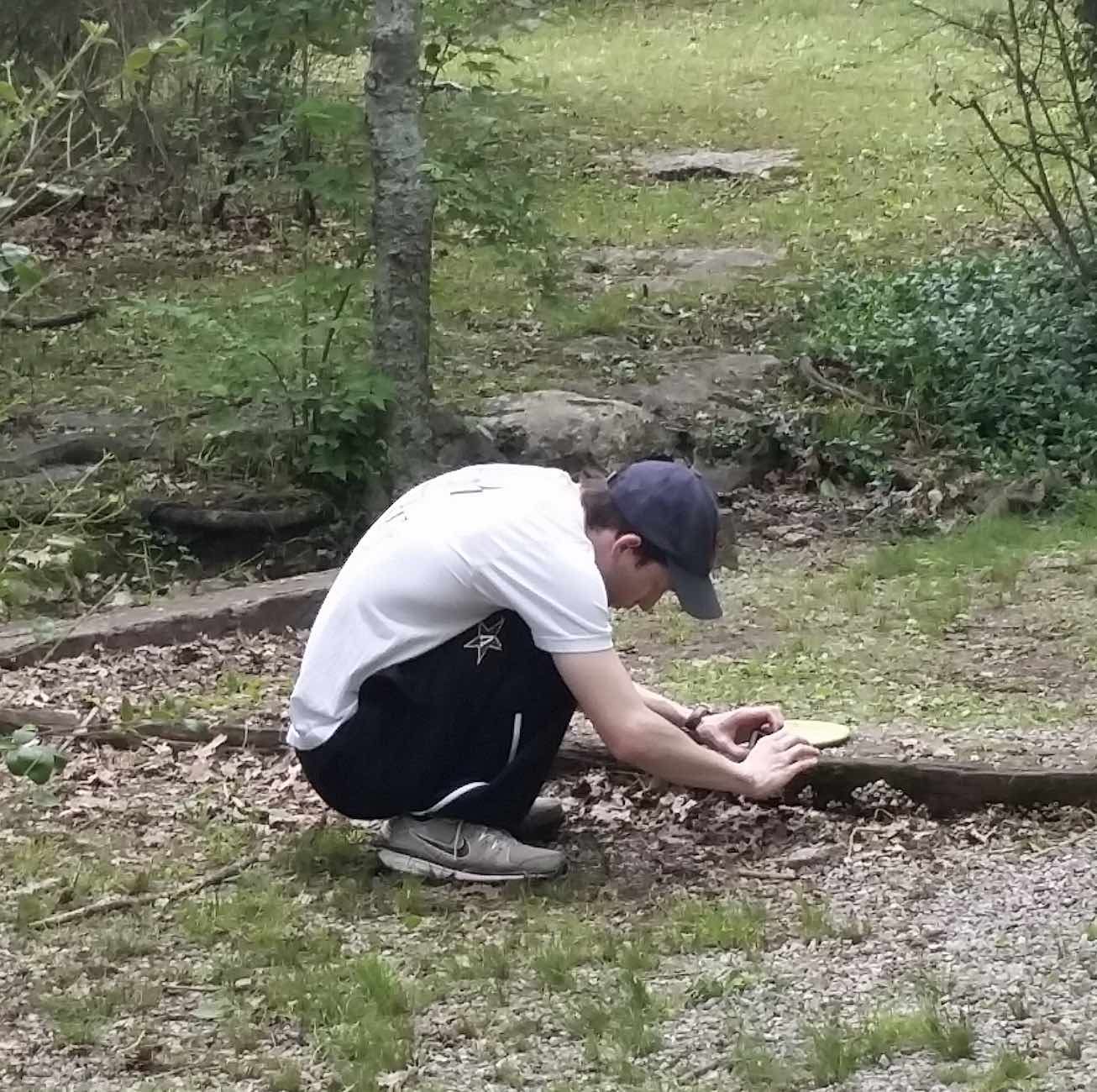 Pictured above, César maintains his curiosity for animals and nature as he captures a photo of wildlife.

As in any creative process, there is never a satisfying end. We can never look at our product and say it is complete and that it’s time to move on to the next thing. Scientific problems are always evolving as we learn new facts and invent new techniques. A scientist will never stop doing experiments, just as a musician or dancer cannot ever perform without rehearsing, and a writer can never write without edits.

When I played in an orchestra in high school, we worked hard before our concerts. Although we were pretty good, we were never perfect. If anything, every concert left me longing for more. While the music was expressive, our parents loved it, and my friends and I succeeded in performing music that has touched the lives of millions of people for centuries, we never quite felt done. I knew where I faltered and where I could improve. I knew what I wanted to do next, and I knew that I needed to try again. I was in a constant pursuit to find the right sound and feeling. 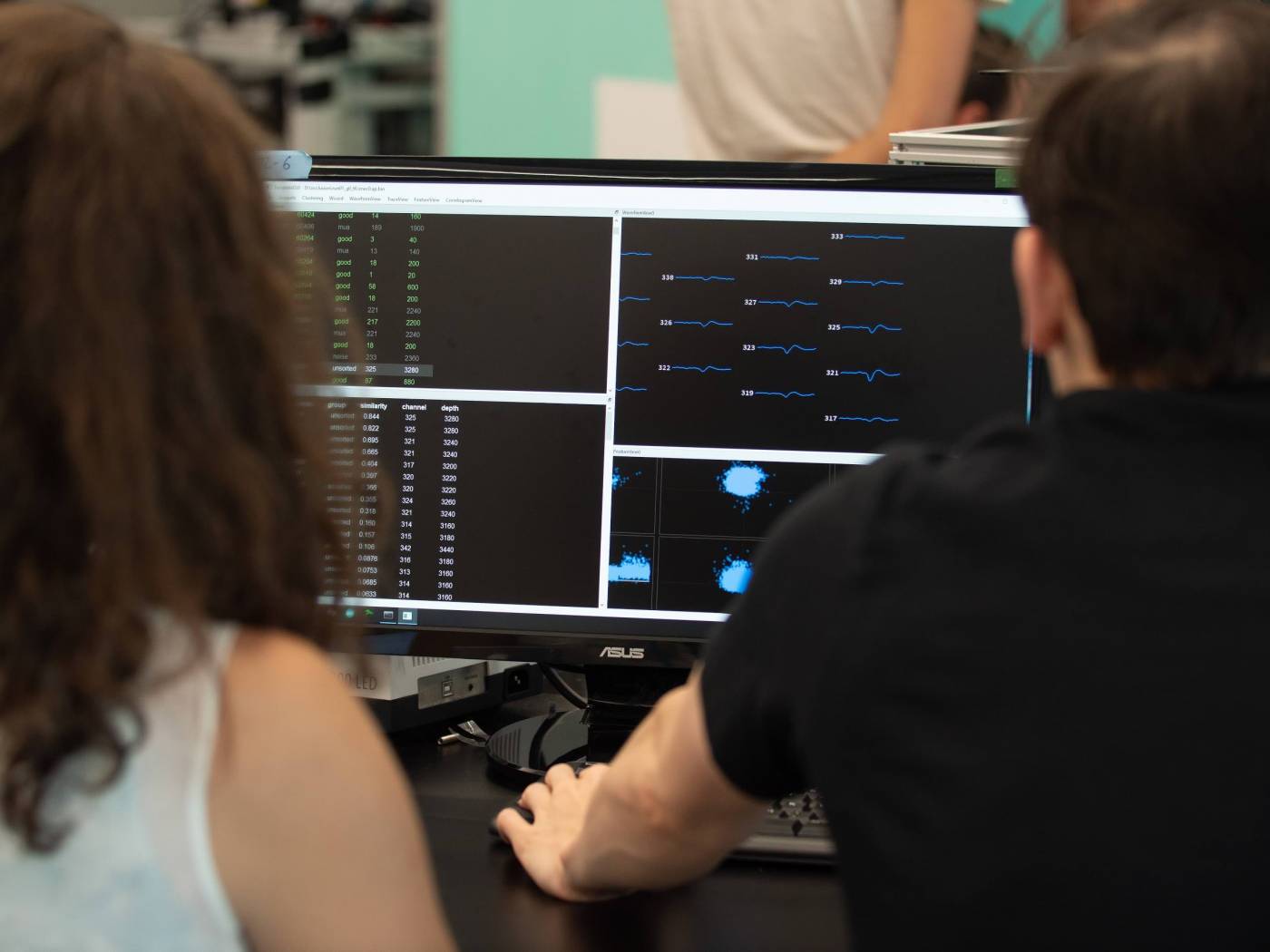 Pictured above, César works on data analysis during a summer course.

Each new answer leads to more questions; perpetuating the process. For every mistake and every discovery, we learn what our next step should look like.

How do I make my experiment better?

What did I learn and what else can this lead me towards?

Each experiment and hour of practice improves on the previous one and brings about a new opportunity to progress and learn.

The arts have taught me how to be OK with the unknown, and to embrace it. I want to learn, do, see, and create more. For this to happen, I have to be simultaneously comfortable and unsatisfied in how much I do not know. I want to make progress but I am also ready to not be perfect. Perfection means the process is over and there is nothing more to do. Art will never get there, and neither will science. In the end, scientists and artists not only work together and think similarly, but are often the same person. Art and science are two sides of our mind, with each side constantly learning from the other. 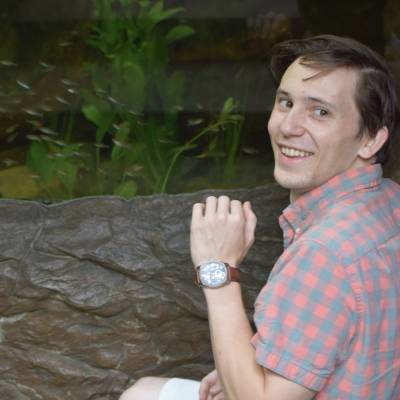 We’re back!!! Yesterday, we welcomed back our first LAB experience class of the spring semester. We had a blast running PCR with @mihsnyc! #rockedu ... See MoreSee Less

January is #NationalMentoringMonth and we're sharing some tips for successful mentorship. At #RockEDU, we believe that good #mentoring requires training. This is why we offer workshops, resources and tools to #maximizementorship. This week, our tip is: #behumanfirst. One way to accomplish this is to focus on building people over projects. If a mentor creates an environment that is comfortable, forgiving + HUMAN, they increase the chances of receiving better outputs. We suggest framing the process of #science research in a human-centered design framework. This allows the process of science to be humanized by allowing your mentee to see where you get your inspiration from.
——————————————-
We want to hear your stories of successful mentorship using a HUMAN perspective! Did sharing your pathway to inspiration help create a healthy lab environment? Tag us in your pics/posts! Stay tuned for our mentor handbook, launching soon! #magnifymentors #sciout #research #STEM #scicomm #teacher #teach #mentor ... See MoreSee Less

@kylemarian @robertnulrich Sekhar, Raveena, and Jennyfer were part of our (@rockedu_ ) 2018 after school and summer research programs for HS students. They remain amazing mentees (and mentors), being sure to visit us often, keeping us in the loop. We are grateful they stick with us!!

The executive summary for the white paper is here. https://t.co/F0JY9QGoS4

Then head to our #SciOutCommunity Homebase, where you can view the outputs of the meeting itself https://t.co/ffyJQXWIhk, including our latest white paper on the continued professionalization of the #sciout field.

Specifically regardig #SciOut18, please check out our Context and Motivations post to learn what it was all about https://t.co/ydLwzIfxBy

Phew! After a huge year of building and creating, we FINALLY have our Guide to Inclusive Science Outreach up, including the long-overdue outputs of the amazing #SciOut18 Unconference. https://t.co/b92fPy0Gz5