Some call it fate or divine help. Others may view it as nothing more than a passing coincidence. Nevertheless, I like to think that throughout my life, I have been lucky enough to experience a few unique opportunities that have guided me towards my life’s calling.

Working with animals is what I was put on earth to do.

For many of us, third grade is an unremarkable grade in the early years of our formal education. But, that was not the case for me. This is because third grade was the first time that I saw a glimpse of what I wanted to do with my life. We were on a field trip to the Liberty Science Center in Jersey City, New Jersey, and my teacher, Ms. Ryan, shuffled her 27 eight-year olds (myself included) into the IMAX theatre. It was there where I sat, mesmerized for 20 minutes, learning about Jane Goodall and her work with chimpanzees in Tanzania. Later that year, Ms. Ryan asked us to dress up and present on an important person in history. Dressed up in boots, khakis and a multi-pocketed vest with a Beanie baby monkey pinned to my shoulder, I proudly recited 10-index-cards-worth of facts on my new idol: Jane Goodall.

My passion for animals carried me into early adulthood, and when the time came to consider undergraduate programs, I narrowed my search to those that had ethology programs. 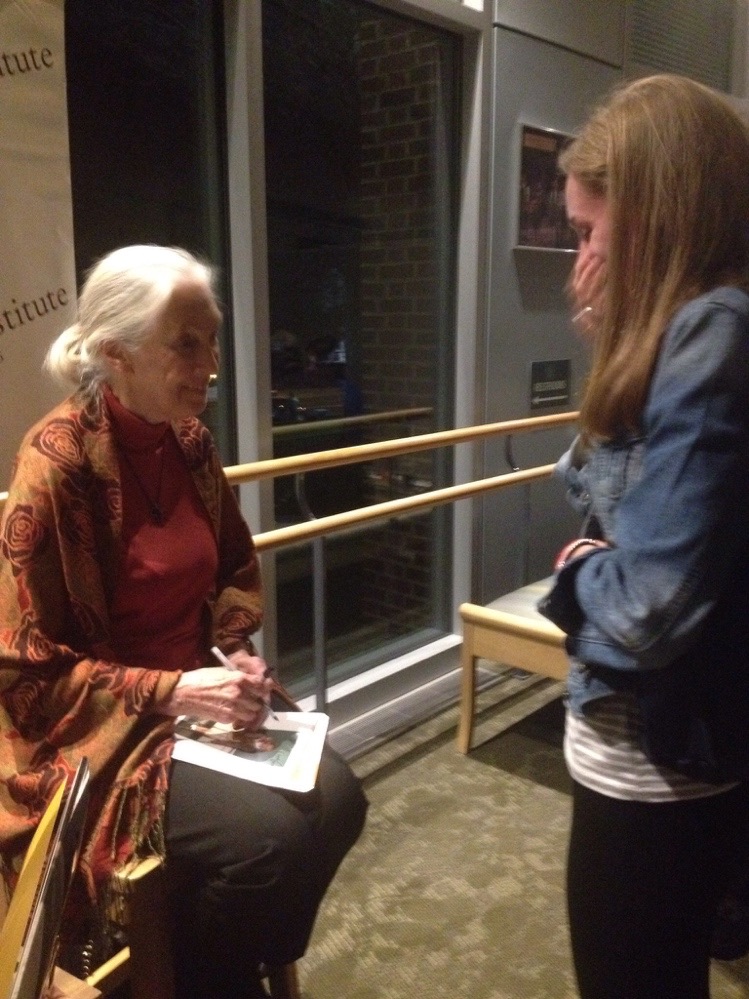 Jane Goodall signing a photo of me dressed as her, and a visual representation of me losing my mind in excitement.

Franklin & Marshall (F&M) became my top choice because of its Animal Behavior program, Vivarium and heavy focus on zoo, laboratory and field work. In the spring of my sophomore year, an F&M professor that collaborated with Dr. Goodall, invited her to speak on campus. In a packed gym, I squeezed my way to the front where I sat, transported back to the first time I was captivated by her on the IMAX screen. After a stellar speech and a standing ovation, Dr. Goodall offered to do a meet-and-greet. I waited in line for an hour and a half before I got the chance to meet the woman who changed my life. I cried and thanked her for her work and the impact she had on me. As we spoke, I handed her a photograph and asked her if she would be willing to sign it. It was a photo of me, in third grade, dressed up as my hero. 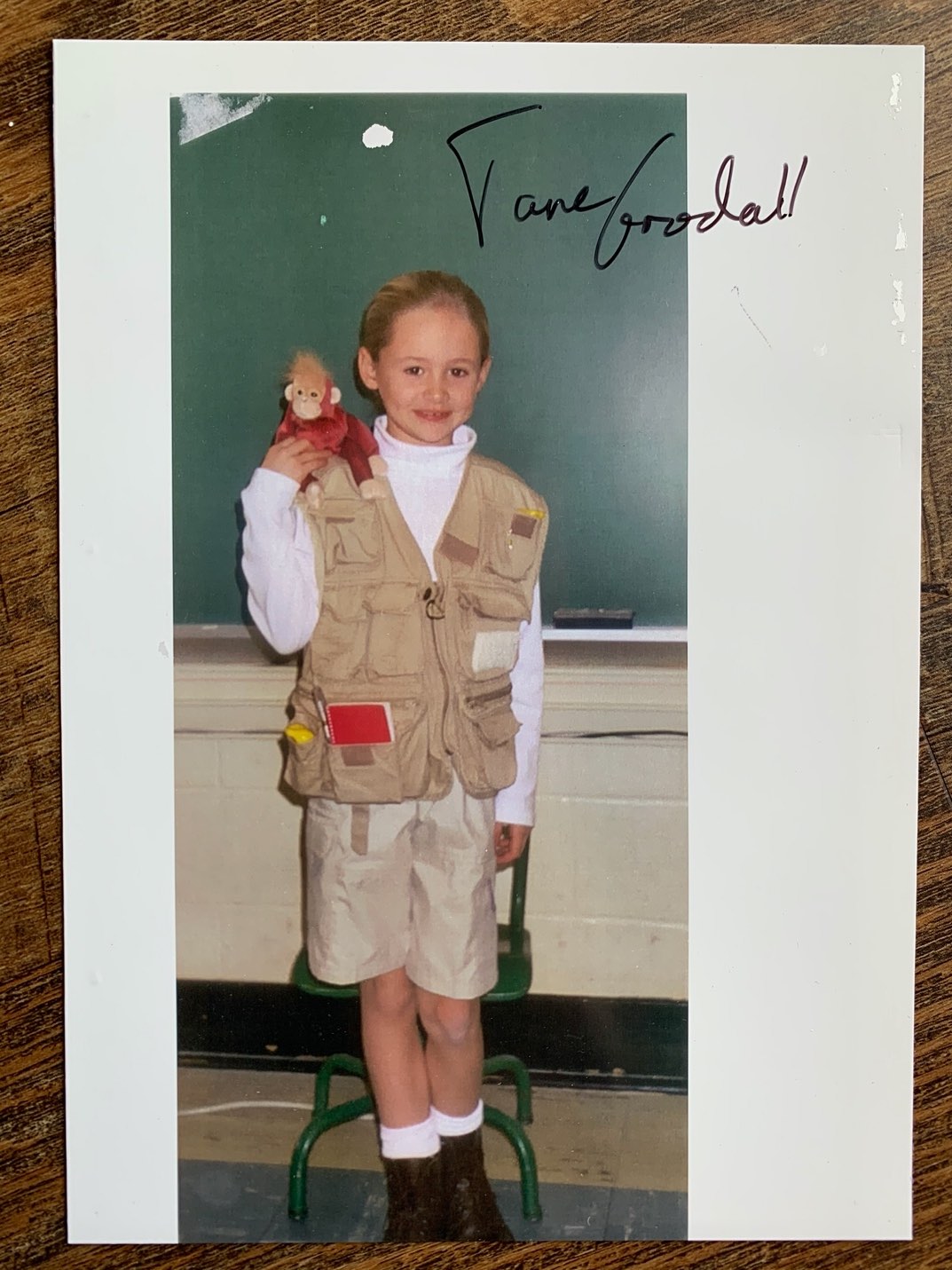 The signed photograph of me as a third grader dressed as Jane Goodall.

In the fall of my junior year, with Jane Goodall as my inspiration, I studied abroad in Tanzania through the School for Field Studies’ Wildlife Management Program. Tanzania reignited my passion for wildlife conservation through my directed research. It was during that semester that I truly understood what a researcher did— including the field work, working with the community, writing and analyzing data! I reflected on my early experiences learning about Jane Goodall and her research, and returned to the United States on with a determination to truly emulate her.

After graduating from F&M, I enrolled in CUNY Hunter College as a Master’s student in the Animal Behavior and Conservation graduate program. The program further fostered my interests in pursuing a career in wildlife conservation research, and for my master’s thesis, I worked in the Bronx Zoo and Turtle Back Zoo where I investigated differences in the cognitive abilities of several carnivorous mammals including African lions and snow leopards. This was tested by employing a multi-access puzzle box that allowed me to examine the differences within and between species of the mammalian order Carnivora. Each puzzle box had a desirable food choice secured within it, and could only be retrieved by unlocking a latch on one or more box ‘doors’. Based on the environmental and social differences—snow leopards are a solitary species, while African lions live in group called “prides”—I expected differences between the two species in the ways they approached the box, selected a door and completed the experiment.

After the arrangement was made between my myself, my advisors and the Bronx Zoo staff for research, my name was passed along to the producers for Animal Planet’s The Zoo. The Zoo highlights the priorities of The Wildlife Conservation Society, and because of the unique nature of my research in combining cognition with a welfare, my work was selected to be featured on an episode!

After a childhood of idolizing Jane Goodall, and spending many after-school afternoons glued to Animal Planet for The Crocodile Hunter, or The Jeff Corwin Experience, filming for Animal Planet was surreal.

It wasn’t until the episode (Season 3, episode 13: Mending Willow) aired in May of 2019 that I received validation that my research was valuable to not only the scientific and zoo communities, but also to the general public. 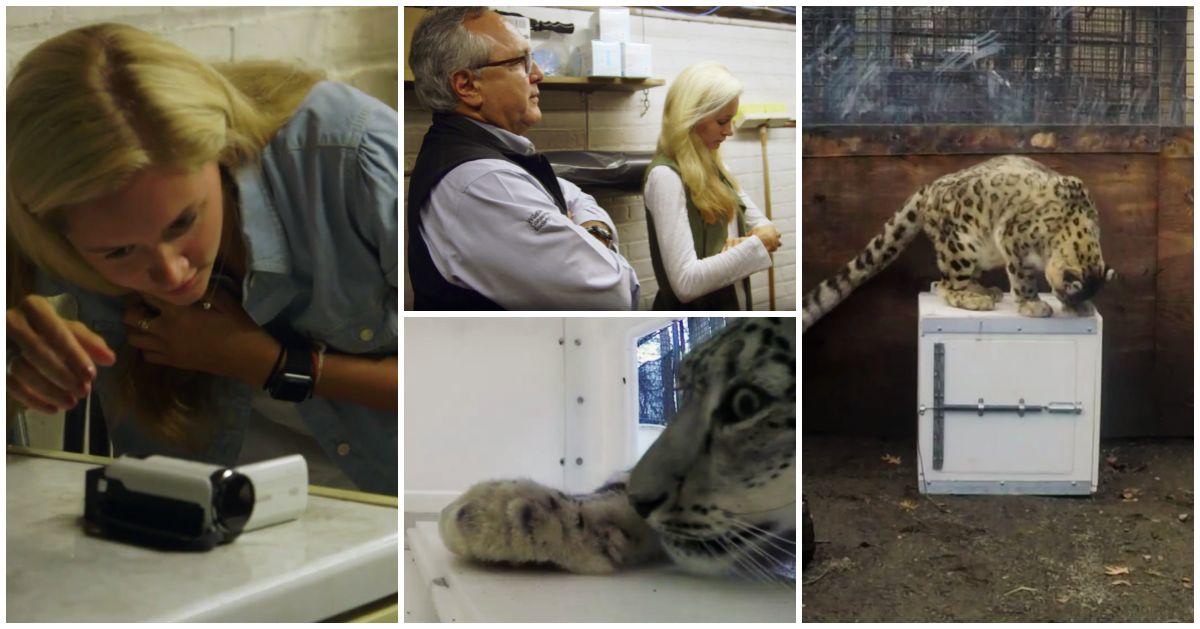 Snapshots of my MA research that was captured on Animal Planet (You can find the episode, here!)

Having a platform, such as The Zoo, was not only meaningful to my professional growth as a new researcher, but also to raising awareness for the dire conservation threats that plague wild cat populations. Almost all of the 40 wild cat species are shrinking, and sixteen species, including the seven being tested, are considered vulnerable or endangered. Like many people, I have always been drawn to large carnivores, yet I was shocked to find out how little research has been conducted on them. Research into these topics (such as the intersection between cognition and welfare) can be used to predict survival in wild reintroduction programs, and to match breeding pairs in captivity. Since beginning my work in conservation research, I have made it my mission, as Jane Goodall did with her chimpanzees, to devote myself to better understanding threatened species. 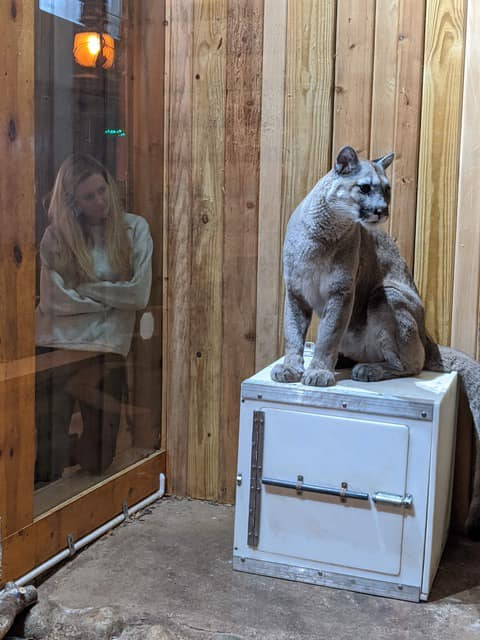 Snapshots of my MA research that was captured on Animal Planet (You can find the episode, here!)

As I continue to progress through the field of animal behavior and learn from my experiences—both positive and negative—, I know that I am meant to contribute to conservation through research.

There’s a quote from Jane Goodall that continues to resonate with me:

More and more often I found myself thinking, ‘this is where I belong. This is what I came into this world to do’

I don’t love what I do everyday. Many days are long and unpredictable. I don’t know where I’ll be tomorrow, let alone next week. But 9 out of 10 days I love what I do, the people I work with and the animals I am lucky to befriend.

Naturally, I’ve grown since third grade, in height and in passion. Along with my growth into adulthood, my dreams have taken shape. These dreams developed as I gained knowledge of the vast animal-related opportunities that exist. I oscillated between hopes of becoming a zookeeper, veterinarian, and even working in an animal shelter! My path to finding my place in animal behavior research ended up being a lot more challenging in practice. But, the experiences have been completely work it, and at the end of the day, my path always brought me back to Jane Goodall and the power of research. But, in contrast to her research on chimpanzees, I was pulled straight into the powerful, large paws of large carnivores. No path is ever clear, or perfect; you are allowed to change your mind and should be flexible in your goals. But do not lose sight of those goals, as they can guide you on a path that fulfills and cultivates to your passions.

Previous
How Could I Not? My Experience Participating in a Clinical Research Study
Next
Thomas Postler 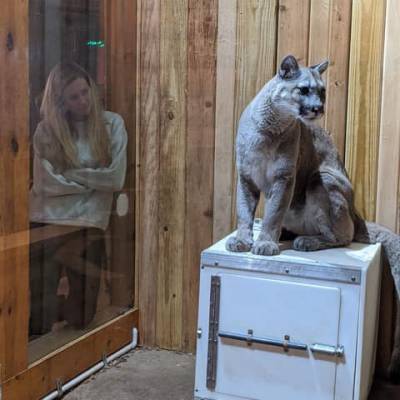 In this piece, former MA student from Hunter College ABC and the Comparative Cognition for Conservation Lab, Josh DiPaola, shares his experience conducting research in Thailand and reflects its influence in forging his unexpected and profound appreciation for pangolins.

Check out our latest #SCIONY featuring Columbia University Medical Center Assistant Professor of Microbiology & Immunology, Thomas Postler, Ph.D! Follow the link, below, to read about his hobbies, passion for discovery in research, and and advice for normalizing failure in science!

After many months of planning, we are so excited to launch our newest blog series: Conservation Chronicles! In this series, we’ll share real stories, experiences and research from scientists that study animal behavior ex-situ and in-situ, insights into conservation (of plants, animals and the environment!), and reflections on how it all mixes together!

To kick off our Conservation Chronicles blog series, we’re sharing a piece by Oakland University Ph.D. student, Victoria O'Connor! Victoria studies comparative cognition in carnivores, specifically the evolution of cognitive abilities, and the effects of social learning for captive welfare and conservation. In this piece, Victoria explores her pathway to animal behavior research, beginning with her earliest inspiration in elementary school and leading her, most recently, to being featured on Animal Planet's The Zoo.
rockedu.rockefeller.edu/blog/i-think-i-started-my-career-in-third-grade/ ... See MoreSee Less

Check out our latest blog post, written by RockEDU Program Manager, Dr. Disan Davis, on her experience participating in a clinical research study. In this piece, Dr. Davis explores her relationship with science (as a scientist, educator, and now participant), discusses her passion and drive for helping people, and reflects on her positive experience with Rockefeller University hospital personnel.

RockEDU strongly opposes discrimination, oppression and bigotry towards any and all minority groups.

Today, we stand with the Jewish community as we join the online movement, #NoSafeSpaceForJewHate.

When we made the decision to make our SSRP entirely virtual, we weren't sure what to expect. But, as in all types of science, sometimes you just have to give it a shot! Read a bit about our process and transition in this lovely piece written by CPA's Asst. Editor, Lori Chertoff!

If high schoolers you know might be interested, or you know any orgs that connected to folks doing High School STEM outreach, please help us spread the word! 😊
@rockedu_ @SACNAS @NSTA @youinthelab @BuildingSTEPS @EnCorps @bhsstem @nycsrmc

For upcoming webinars and recordings of past ones, go to https://t.co/xUvtzggVuv! ⭐️

Please help us spread the word about our WEBINAR on 10/2 at 7pm ET led by Kirill Chesnov, (@chesnol96), Graduate Student in Neurobiology at Duke University, on research opportunities for high schoolers!

Very happy to see more outreach jobs out there. Scientists and educators, check this out! #sciout #scicomm #Scied #sciengage https://t.co/a2rnJ496WF